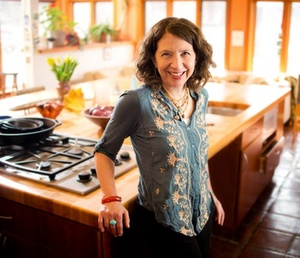 Lisa Gottlieb (Photo from the Fall 2015 issue of Crazy Wisdom Community Journal)She co-founded Selma Cafe in 2009 with her husband at the time, Jeff McCabe. The weekly breakfast salon, held at their home near Eberwhite Elementary School, often featured chefs from local restaurants using locally-produced food. The breakfasts were prepared and served by a staff of volunteers, with donations accepted to support local farmers. Selma Cafe moved location in 2013 to Sunward Cohousing, after the city notified the group that the breakfasts were violating local zoning ordinances. Then in mid-2014 Gottlieb announced that the event would be taking an indefinite hiatus. The last breakfast was in April 2014.

Gottlieb is also a school social worker for the Washtenaw Intermediate School District (WISD). She provides services to students in the Washtenaw County Juvenile Detention Center, for the Ann Arbor Deaf and Hard of Hearing Program, and WAVE (Washtenaw Alliance for Virtual Education), a countywide alternative high school program. As part of her work with the juvenile detention center, she helped start a community garden located in the building's courtyard. She is a certified Kripalu yoga teacher.

In 2014 she founded a practice group for compassionate communication (also known as nonviolent communication) in Ann Arbor.

Gottlieb lives on the Old West Side near Eberwhite Woods. Her daughter, Zoe Clark, is executive producer at Michigan Radio (NPR), and co-host of the weekly radio program It’s Just Politics. Her son, Nevon Clark, works at the Ravens Club restaurant in downtown Ann Arbor.

Selma Cafe to open for brunch at new location after troubles with city codes – AnnArbor.com, June 7, 2013

The Story of the Legendary Selma Cafe – video by Andrew Kaufman, April 18, 2013

Interview with Lisa Gottlieb and Jeff McCabe (video) – Jeannie on the Beat show, May 2011

August 2014: Announces that Selma Cafe will be taking an indefinite hiatus.

2007: Earns masters degree in social work from the University of Michigan School of Social Work.