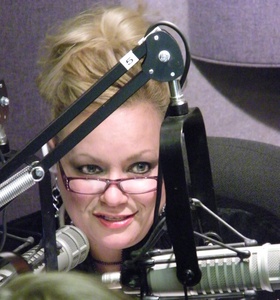 Lucy Ann Lance in studio at WLBY.Her current radio show is on WLBY 1290 AM and is produced by Lance & Erskine Communications, the company she co-owns with her business partner, Dean Erskine.

A lifelong resident of Ann Arbor, she graduated from Huron High School. and the University of Michigan. Her background includes more than 25 years of radio experience as morning show host, news anchor, and assistant news director. She previously filed network reports for NBC and Mutual Radio News, and was the host of PAX TV’s "Michigan Forum.: Her mentors include the late Ted Heusel, who pioneered the radio talk format, and the late “Fat” Bob Taylor, who was one of her former co-hosts.