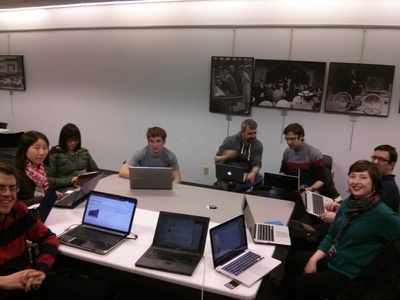 On March 26, 2014 the Ann Arbor District Library hosted an Arborwiki edit party at the AADL Freespace. Ed and Mariah were ringleaders.

We had a good turnout at the March 2014 edit night for Arborwiki at the Ann Arbor District Library. 11 people were there in total. We had help from the library in organizing and promoting the event, and the Michigan Wikipedians student group met together with us. The event was promoted through library channels (which included announcements on local student radio, WCBN) as well as through Meetup, Facebook, Wikipedia, and email.

Ed talked for a bit about some of the highlights of Arborwiki (the Birthday Deals page, the Donuts page, the obituaries, the maps). Of particular interest was the question of when and how the wiki would get better versions of Open Streetmap tiles - the local coverage on OSM includes a lot of building outlines and names and would be spectacular to be fully integrated in with detailed tiles.

Michael noted the discussion of covering businesses and/vs. covering events, and the related points about similarities and differences between ArborWiki and Yelp.  It really intrigued him.

Dan asked about the page with all the tags, and found it:  http://ArborWiki.org/tags quite a few!!!!

David asked about adding digitized video, which we can do via embeds. There are a lot of bands with videos online that could use a good page.

One of Ed's favorite examples from other wikis was this

discussion of the Oakland edit philosophies.

The most productive part of the event (in terms of raw pages updated) was an effort by Michael to add photos currently held in Wikimedia Commons into Arborwiki for buildings on the list of University of Michigan buildings.

It was a good night, and we plan to do it again at a local bar in a month.

Some pages that were edited at the event include: