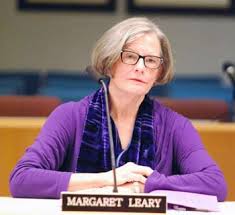 Leary also serves as a trustee on the Ann Arbor District Library board. She has held a seat on the board since 2004, including stints as the board president. Most recently she was re-elected to a four-year term in 2012, which runs through 2016.

Leary is the author of "Giving It All Away: The Story of William W. Cook and His Michigan Law Quadrangle," published by the University of Michigan Press in 2011.

Link to .pdf of Leary's 2009 speech, given at the U-M Law School's Sesquicentennial Lunch.

Video by Michigan Law interviewing Leary about her book (May 2012): https://www.youtube.com/watch?v=lp8PFa4uAZs