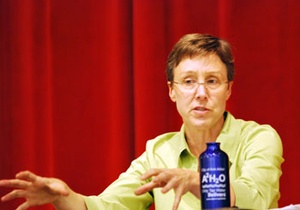 Margie Teall at a June 2010 candidate forum. (Photo courtesy of The Ann Arbor Chronicle.)Margie (White) Teall (b. 1958) served as a Democrat on the Ann Arbor City Council, representing Ward 4 from November 2002 to November 2014. Teall was elected mayor pro tem by her Council colleagues for the 2013-2014 council year.

Teall decided not to run in the 2014 election, and that seat was won by Graydon Krapohl, a Democrat who ran unopposed in both the August primary and November general election.

By virtue of her council seat, Teall served on the city's environmental commission, Downtown Development Authority Partnerships committee, and the Housing and Human Services Advisory Board.

Teall is a freelance photographer and is married to Graham Teall, an assistant U.S. attorney at the U.S. Department of Justice and former Washtenaw County Democratic Party chair. They have two daughters, Clara and Gillian, and live in the Lower Burns Park neighborhood.