Mary Jo Callan is director of Washtenaw County's Office of Community and Economic Development (OCED). She is a former executive director of the nonprofit Ozone House. 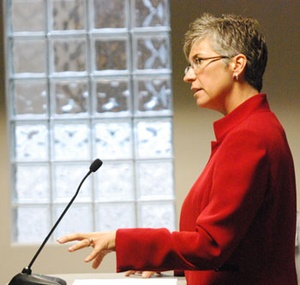 Mary Jo Callan at the June 2014 meeting of the Ann Arbor Downtown Development Authority board. (Photo courtesy of The Ann Arbor Chronicle.)Callan has been director of OCED since 2012, when the county's economic development and workforce development operations were consolidated. The office also manages economic and community development services for the city of Ann Arbor. Before that she led the county/city Office of Community Development from 2007 to 2011.

In the 1993-94 academic year, Callan taught high school civics, history and journalism for the Kingsley Area Schools in Kingsley, Michigan. She also coached the girls' Junior Varsity softball team and served as faculty advisor for school yearbook. In 1992-93, Callan was mentorship education coordinator for the Wayne-Westland Schools.

She has a masters degree in social work from the University of Michigan, and a bachelors degree in general studies and humanities and a teaching certificate, also from UM. She earned a Society of Human Resource Management Certificate from Eastern Michigan University.

Callan is married to Katie Doyle, the current executive director of the Ozone House. They live in Ypsilanti.