Mary Morgan is founder and executive director of The CivCity Initiative, a nonprofit focused on increasing awareness of and participation in local government and civic life. Via CivCity, she operates AnnArborVotes, an online local voter resource. She also is featured on Civic Matters, a weekly segment. that airs on NPR's WEMU Morning Edition each Monday. 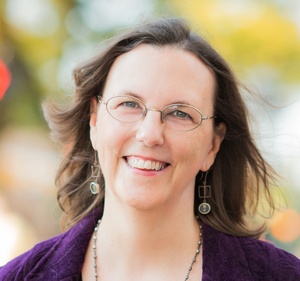 Mary Morgan (2014 photo by Myra Klarman)Morgan publishes a weekly newsletter for CivCity focused on local action items and other civic information. She also writes occasional columns on news of civic interest that are published on Medium. She was the inaugural Community Leader in Residence for the University of Michigan Ginsberg Center in 2016-17 and serves on the Blue Ribbon Advisory Group for the Ann Arbor Public Schools.

In 2008, Morgan co-founded and served as publisher of the Ann Arbor Chronicle, an online news site covering local government and civic affairs that operated through 2014. She previously worked for The Ann Arbor News, serving as opinion editor and business editor. She began her tenure at The News in 1996 as a business reporter.

Morgan was born and raised in Indianapolis, Indiana. She received undergraduate and graduate degrees from Indiana University (Bloomington). She also served in the Peace Corps, teaching English and training teachers in the Central African Republic. After graduate school she worked for two years teaching English in the People's Republic of China.

Morgan is married to Dave Askins, who is currently working as a reporter at the Capital Journal in Pierre, South Dakota. She lives on Ann Arbor's Old West Side.

September 2008-September 2014: Is co-founder – along with Dave Askins – of The Ann Arbor Chronicle, an online news site featuring in-depth reporting on local government and civic affairs. Serves as publisher, as well as covering several public entities, including the Ann Arbor District Library board, Washtenaw County board of commissioners, Ann Arbor planning commission, and the Ann Arbor park advisory commission, among others.

2006-2008: Works as opinion editor at The Ann Arbor News, overseeing the editorial and opinion pages.

2003-2006: Serves on the board of the nonprofit Women's Center of Southeastern Michigan.

2000-2001: Works as a reporter covering the University of Michigan for The Ann Arbor News.

1993-1996: Works as a business reporter for the Rochester Business Journal in Rochester, N.Y.

1990-1992: Works as an English teacher at Xi'an Medical University in the People's Republic of China, teaching doctors and nurses who intend to study or work in English-speaking countries.

1989: Receives a master's degree in linguistics from Indiana University (Bloomington).

1985-1987: Serves in the Peace Corps, teaching English and training teachers in the Central African Republic.

CivCity's quest to rescue American democracy, one community at a time – MarkMaynard.com, Sept. 8, 2015

Cultivating engaged citizenry in A2 – The Ann, August 2015

The Newsphere: Understanding the News and Information Environment: How The Ann Arbor Chronicle Creates Value – section in the 2012 book by Christine M. Tracy.

Passion Is What Helps Pay for The Chronicle – Crain’s Detroit Business, July 19, 2010

Businesses We Can Be Passionate About – Current, April 2009

Stories by Mary Morgan on the Ann Arbor Chronicle.