Matthew Altruda – also known as "Toona" – is a band manager and promoter, DJ, and events organizer whose work includes host of the weekly Tree Town Sound on 107.1 FM and programming for the popular Sonic Lunch weekly summer concert series, held on Thursdays at noon in Liberty Plaza. 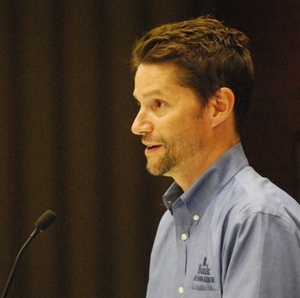 Matthew Altruda at an August 2014 meeting of the Ann Arbor park advisory commission. (Photo courtesy of The Ann Arbor Chronicle.)

He works in the marketing department for the Bank of Ann Arbor, which sponsors Sonic Lunch. Altruda also programmed "The Puck Drops Here" party on New Year's Eve 2013 in downtown Ann Arbor, as well as stages at the art fairs and events like Taste of Ann Arbor. The bands/singers he's managed/booked include The Macpodz and My Dear Disco. In 2013 he also hosted the monthly Let's Get Weird Variety Show at Live. He was listed in AnnArbor.com's Ones to Watch in 2013.

Altruda is the son of former Borders president Vincent Altruda.