Michelle Rogers joined Heritage Newspapers in October 1995 when the company purchased The Chelsea Standard and The Dexter Leader from Helen and Walter Leonard. She had covered the Dexter community since May 1992 as a reporter for The Dexter Leader and was promoted to associate editor of both newspapers shortly after the purchase.

In October 2000, Rogers was named editor of both publications. The following year, the newspapers won nine awards in the Michigan Press Association’s Better Newspaper Contest for local news reporting, sports coverage, local columns, lifestyles coverage, photography and design. Under her watch, The Chelsea Standard was named Newspaper of the Year in 2004 and The Dexter Leader in 2005.

In November 2006, the Pittsfield Township resident was named editor of The Saline Reporter and The Milan News-Leader, part of the Southgate-based Heritage Newspapers, which is owned by the Journal Register Co. She also served six months as acting editor of The Manchester Enterprise, from November 2006 to May 2007. In June 2009, she was named editor of A2 Journal, a new publication the newspaper chain launched July 9, 2009. At that time, she was also named managing editor of the seven other newspapers in Washtenaw County published by Heritage. Heritage Newspapers publishes papers in Saline, Milan, Chelsea, Dexter, Manchester, Ypsilanti and Belleville.

July 2010-February 2014, Rogers simultaneously served in Journal Register Co.'s ideaLab. She was among 18 employees selected from among hundreds who applied for the inaugural program, which was later expanded, to experiment with new technology and tools to help the company think differently about what it does and how it does it. Read more about the project at http://jrcbenfranklinproject.wordpress.com/jrc-idealab/ or visit Rogers' blog at http://idealabheritage.wordpress.com/about/  In April 2012, her ideaLab project changed course from podcasting to launching a Community Media Lab in Ypsilanti, and it was one of 12 media lab proposals from across the United States, approved for funding from JRC's management team at Digital First Media. The lab, which expanded its reach to draw people from across southeast Michigan, hosted free workshop and provideed individual training to anyone interested in learning digital storytelling tools, including video, audio, polls, data visualizations, locator maps, livestreaming video, live chats, social media, document embeds and photo slideshows.

In February 2013, the company, emerging from its second bankruptcy, eliminated the managing editor position held by Rogers and she was promoted to the newly created position director of community engagement and editorial training for JRC's Michigan Group of newspapers and websites. As part of her responsibilities, she headed up the Southeast Michigan Media Lab located in the SPARK-East building in downtown Ypsilanti; oversaw the community engagement team for JRC across Michigan; directed blogger recruitment and training, recruiting more than 100 bloggers in her first year; worked with editors on recruitment of citizen journalists; and led newsroom training for the group; scheduled regular online chats; and monitored and trained news staff on social media use.

In March 2014, Heritage Media eliminated The View publication in Belleville, redirected resources previously dedicated to the A2 Journal and combined its remaining western Washtenaw County publications (Chelsea, Dexter, Saline, Milan, Manchester and Ypsilanti), where Rogers got her start, into one called Washtenaw Now.

Two months later, in May 2014, Rogers' director position was eliminated as she returned from medical leave, having donated one of her kidneys to a family friend. She and the kidney recipient had blogged about their experiences, appeared in an interview on WDIV Channel 4 in Detroit, spoke about it on the Blaine and Allyson radio show on 96.3 WDVD, and were featured on the Beaumont Hospital website in a campaign to promote kidney donation and raise awareness of the need for kidney donors.

In July 2014, Digital First Media's corporate offices announced the end of Thunderdome, its centralized newsroom project in New York City that attracted top talent from across its properties, and eliminated the digital transformation editor and chief learning officer positions, among dozens of other positions at various newsrooms across the country. Editor-in-Chief Jim Brady resigned shortly after it was announced Thunderdome was being disbanded. One of the most recent news reports stated Alden Global Capital, the hedge fund that owns Digital First Media, was selling off the company.

Rogers moved to California in July 2014 for a job as content editor at the Record Searchlight, a daily newspaper and website in Redding, California, owned at the time by Scripps Media. In April 2015,  the news organization became part of the newly created Journal Media Group and the following year was purchased by Gannett, part of the USA TODAY NETWORK. As part of her role there, Rogers served as  editor of features, directed community engagement and social media strategy, and assisted reporters in their use of digital storytelling tools. In April 2015, she launched the 530 Media Project to provide free workshops on social media and digital media to the community. The project won honorable mention in Editor & Publisher's 10 Newspapers That Do It Right contest and was written about in Media Life Magazine.

In July 2016, Rogers was invited to apply for the newly created position of consumer experience director at The Ventura County Star, also part of Gannett and the USA TODAY NETWORK. She was hired and relocated to Camarillo in Southern California in September 2016. In her new role, one of Gannett's positions created as part of its Newsroom of the Future project, Rogers oversees the programming, production, packaging and promotion of newsroom content.  She works with The Star's content creation team to decide when to publish content and on which platforms. Her team includes an audience analyst, print and digital planners, producers, engagement editors, community content editors and developers. They look at how The Star's audience consumes and responds to content, and look at audience feedback to better engage readers.

While Rogers now lives in Southern California, she still owns a home in Pittsfield Township and has ties to family, friends and colleagues in Ann Arbor, and across Washtenaw County and Metro Detroit.

Rogers is a 1986 graduate of Whitmore Lake High School. She earned a bachelor’s degree in journalism and political science from Eastern Michigan University in 1991, and received management training while employed with Heritage Media. Her journalism career includes awards for feature writing and general reporting from the Society of Professional Journalists Detroit Metropolitan Chapter, as well as awards in local news reporting, photography, lifestyles coverage, general excellence and enterprise feature writing from the Michigan Press Association, and column writing from the Suburban Newspapers of America.

Rogers' community involvement in Michigan included a two-year role on the board of directors at the Great Lakes Rabbit Sanctuary and serving as chairwoman of the group's publicity committee. In Redding, she graduated from the Leadership Redding program and earned the group's Great Communicator award in summer 2016. She also served on the Women's Fund of Shasta Regional Community Foundation cabinet and was chairwoman of its Community Engagement Committee. Her time there was short because of her job promotion and relocation. 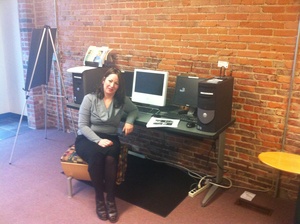