"The Big House", the home of the University of Michigan football team, was built in 1927 at a cost of $950,000 by Fielding Yost, with an original capacity of 72,000. The field itself and most of the seating is well below the level of surrounding streets, masking the size of the stadium. The playing surface is FieldTurf, and artificial turf designed to mimic natural grass and reduce player injury by providing a softer surface. Lights were added in 2011 to allow for nighttime play; the first ever night game at the stadium was held September 10, 2011, seeing Michigan beat Notre Dame. 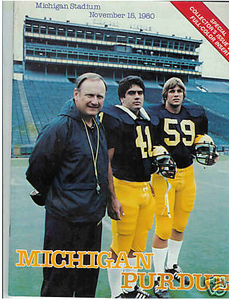 Since completion of controversial $226 million renovation in 2010, official capacity is now 109,901, which makes it the largest football stadium in the United States, and the third-largest stadium in the world. The record for the largest-ever attendance at any college football game was set on September 7, 2013, with 115,901 on hand. The record for the largest ever attendance at any hockey game at any venue of 113,411 was set on December 11, 2010 at The Big Chill at the Big House.

The stadium capacity approximates the population of the City of Ann Arbor. Hence, Michigan Football home games are accompanied by massive traffic tie-ups which can include both local surface streets and Interstates around town. Fans arrive as early as the day prior to the game to tailgate, and overtake the nearby Pioneer High School and University of Michigan Golf Course, as well as surrounding neighborhoods.

The sculpture in front is Ann Arbor Eagle, a World War II memorial.

As a hockey venue

On December 11, 2010, Michigan Stadium hosted The Big Chill at the Big House, a men's college hockey game pitching Michigan against Michigan State. Michigan won, 5-0. The game set the attendance record for any hockey match. In the days preceding the game, over 40 other hockey matches took place on the ice, ranging from "midget" games to high school and smaller college matches. Public free-skate was available on the day following, with admission proceeds benefiting Mott's Children's Hospital.

On January 1, 2014, the Toronto Maple Leafs defeated the Detroit Red Wings 3-2 in the NHL Winter Classic.

Michigan Stadium is used for the University of Michigan's main graduation ceremonies.  In addition, the Stadium field has served as the location for many weddings.  Recently, a 2014 International Champions Cup soccer match between Real Madrid and Manchester United had an attendance of 109, 319, a record crowd for a soccer match in the United States.

It has long been rumored that a steam-powered bulldozer, crane, or steam shovel used in the original construction is buried under the field, though there is no evidence to support that. A similar story is told about a bulldozer buried in Champaign, Illinois at the University of Illinois Memorial Field.

One seat is said to be reserved for Fritz Crisler.

Every home game has been sold out since the mid-1970's.

Sara Krulwich, at the time a student photographer for the Michigan Daily, was the first woman on the field -- in 1969.