Mike Anglin (b. 1944) served as a Democrat on the  Ann Arbor City Council representing Ward 5 from November 2007 until November 2015.  He and his wife, Kathy Clark, are owners of the First Street Garden Inn, a bed and breakfast on the Old West Side. 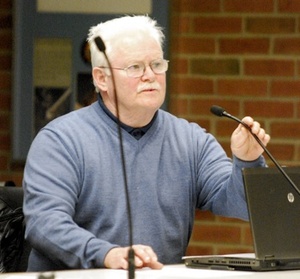 Mike Anglin at the April 2014 meeting of the Ann Arbor park advisory commission. (Photo courtesy of The Ann Arbor Chronicle.)

In his capacity as a city council member, Anglin served as an ex officio (non-voting) member of the Ann Arbor park advisory commission.

Anglin's volunteer activities include working with the Ann Arbor Kiwanis Club helping with Saturday sales, and previously serving on the Kiwanis board of directors. He helped organize the Kiwanis Meals on Wheels program and makes Meals on Wheels deliveries. He also tutors children in reading for the Family Learning Institute, and serves on the executive committee of the local chapter of the Sierra Club – Huron Valley Group.