Nancy Kaplan is a community activist and member of the Ann Arbor District Library board. She was first elected to the AADL board in 2010 and was re-elected in 2012 for a term running through 2016. 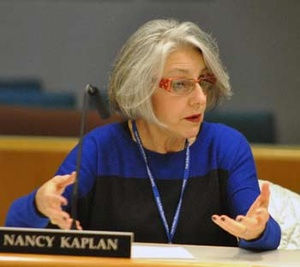 Nancy Kaplan at a January 2013 meeting of the Ann Arbor District Library board. (Photo courtesy of The Ann Arbor Chronicle.)

Kaplan produced and hosted "Other Perspectives," an interview show that aired on Community Television Network. She has served on the advisory board for the Allen Creek Greenway Conservancy and on the University of Michigan Council for Disability Concerns. Kaplan also volunteers with the Ann Arbor Natural Area Preservation program and the Sierra Club Huron Valley Group.

Before retiring, Kaplan was director of the Glacier Hills Physical Therapy Department.

She is married to Harvey Kaplan, a former Pfizer executive. They live in a neighborhood abutting the Huron Hills golf course on the city's east side. She had advocated for preserving the golf course when the city explored options that included possible public/private partnerships. In 2010 she was part of the "Ann Arbor Golf" group that presented a proposal to the city to operate the course through a nonprofit foundation. Ultimately, the city continued to run the golf course as a city parks & recreation facility.

As we explained in the first of this series, this blog discussion is slightly modified from a white paper prepared by a subcommittee of Public Land – Public Process. The authors are Vivienne Armentrout, Nancy Kaplan, Eric Lipson, and Leslie Morris.