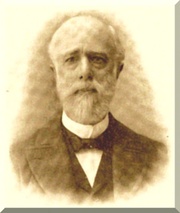 Noah Wood Cheever (b. July 22, 1839, Mohawk County, New York State; d. July 20, 1905 or 1906) was a prominent Michigan judge, resident of Ann Arbor and author of a jolly memoir of University student life in Civil War times and earlier, Stories and Amusing Incidents in the Early History of the University of Michigan (Ann Arbor Register Publishing Co., 1895).

Later in his career, Cheever authored another pamphlet, Pleasant Walks and Drives about Ann Arbor. The second son of William and Emaline Wood Cheever, he moved with his family to Illinois in 1844 and then to Michigan in 1857. The family finally settled in Ann Arbor in 1859 and established a farm off Geddes Avenue near the modern Rock Creek Drive.

Cheever graduated from the University of Michigan's Literary Department in 1863, and followed that with an LLB in 1865 and a Masters of Arts in 1866. He became the Ann Arbor City Attorney in 1869 and four years later was elected as Washtenaw County's Probate Judge. After serving one four-year term he set up a private law practice, which sustained him until his death. In his later years he was a perennial and unsuccessful candidate for state offices (Michigan Supreme Court and governor), running as part of the Prohibition Party.

Adelia Noble Cheever, Noah's wife, inherited the house at 516 Madison Street in 1879, and the couple made it their home until his death in 1905 (Adelia died on Feb. 26, 1899). Ownership of the house passed to Adelia's sister Pamela Noble, who upon her death in 1921 donated the home to the University for use as a women's dormitory to be known as Adelia Cheever House (which see).  An 1880s stereoview of the Cheevers' residence: http://www.flickr.com/photos/[email protected]/6360640637/

There is confusion over whether Noah Cheever died in 1905 or 1906. The July 20, 1906 date comes from an anonymously compiled transcript of headstones in Forest Hill cemetery residing at USGENWEB, while both the annals of the Michigan State Historical Society and Pleasant Walks and Drives about Ann Arbor, the annotated centennial compilation and reissue of Cheever's ten walks overseen by the Bentley Historical Library gives July 20, 1905 as the date. A trip to plot 266 block 33 at the cemetery would probably put this to rest. Any volunteers?

The Boulevard, Cascade Glen, School Girls' Glen , Lover's Lane, and Picnic Island, were all familiar nameplaces for the Ann Arbor community. Judge Noah Cheever, who had first arrived in Ann Arbor as a student in 1859, printed a small pamphlet entitled Pleasant Walks and Drives about Ann Arbor. "Some of them will be rather long to designate as walks," He forewarns, "but all who posses a bicycle or a horse or a horse and carriage, can readily enjoy the longest of them." It was not unusual for casual walks to extend for miles, according to accounts left within diaries and letters.