North University Avenue is an east-west street on the northern edge of the original University of Michigan campus. It runs east from State Street, crossing Thayer Street, the Ingalls Mall, and Fletcher Street, before departing its original alignment, heading southeast to meet Geddes Avenue at Church Street. A large pedestrian walkway follows the original alignment to Washtenaw Avenue, taking a bridge over the avenue before circling Palmer Field.

North University is four lanes (two each way) with a median for its entire length, except for the block between State and Thayer (two lanes eastbound, one lane westbound, no median), which is also the only section that has parking along the street.

We'll start at State Street, having just crossed the street from the Nickels Arcade. 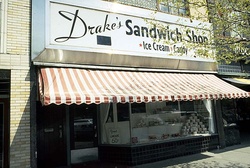 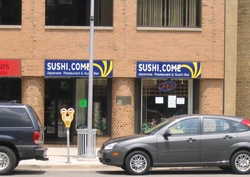 North University here turns to the southeast, along the former alignment of Washtenaw Avenue. A footpath crosses Washtenaw Avenue leading to the CCRB, and a second footpath goes towards the USB and the Life Sciences Institute.