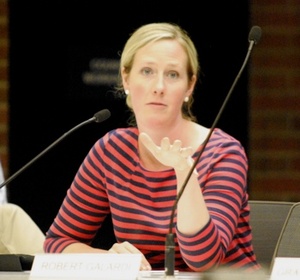 Paige Morrison at the July 2014 meeting of the Ann Arbor park advisory commission. (Photo courtesy of The Ann Arbor Chronicle.)

She was appointed to PAC in February 2014 to serve the remainder of the term previously held by Jennifer Geer, who resigned. That term runs through May 19, 2016. Morrison was elected vice chair of PAC for a one-year term starting Sept. 1, 2014.

Morrison earned her bachelors degree in organizational studies and political science from the University of Michigan in 2006. While at UM she was elected vice president of the student government for the College of Literature, Science & the Arts (LSA).

Morrison is married to Joe Morrison, an attorney. The couple has two young children and lives in Ann Arbor's Allmendinger Park neighborhood.