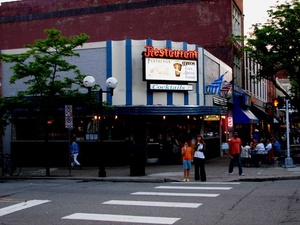 The Parthenon was a traditional American-Greek restaurant located in downtown at the northwest corner of Main Street and Liberty Street. It was owned by the brothers John & Steve Gavas, and operated from 1975 until 2012.

They were the first place in Ann Arbor to introduce the Greek Gyros sandwich. After several years, the Parthenon switched from an all-day cafeteria line to waiter service in the evening.

The building had previously been occupied by Cunningham Drug Store, which operated there from 1940 until 1971. The Gavas brothers removed most of the drug store's distinctive green metal paneling on the exterior, exposing the brick wall of the former Mack & Co. department store, which had been located there until 1935.

The Parthenon closed in 2012. It was replaced by a new restaurant Lena and a new location for Cafe Habana.

The 4,000-square-foot Parthenon Restaurant, which is owned by John and Steve Gavas, was listed for sale for $650,000. Ann Arbor-based Curtis Commercial owns the building on the corner of Main and Liberty streets.

The Parthenon Gyros Restaurant has been opened at S. Main and Liberty St. in a building most recently occupied by Pots and Plants and formerly by the Cunningham Drug Store.

OPA! From saganaki to gyros, Parthenon is excellent.