Paul Saginaw is co-founder, along with Ari Weinzweig, of Zingerman's Deli and the Zingerman's Community of Businesses. 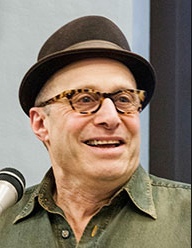 He helped start the nonprofit Food Gatherers, and has served on a wide variety of boards for other organizations, including the Washtenaw Housing Alliance, NEW Center and the national Business Alliance for Local Living Economies (BALLE).

Saginaw has been an advocate for increasing the federal minimum wage to a "thriving wage" level, and in 2014 received a Champions of Change award award from the White House, given to people who have taken action to raise wages for working men and women around the country.

Saginaw and his wife, Lori Saginaw, live in the Burns Park neighborhood. They have two sons, Ben and Zach.

May 2015: Gives University of Michigan spring commencement address, along with Ari Weinzweig.

2014: Receives Champions of Change award award from the White House, given to people who have taken action to raise wages for working men and women around the country.

DATE? Serves on the board of the national Business Alliance for Local Living Economies (BALLE).

April 1995: Receives the Jewish Federation of Washtenaw County’s first Humanitarian Award, along with Ari Weinzweig, for their community contributions.

March 15, 1982: Opens Zingerman's Deli on Detroit Street with Ari Weinzweig, two employees, and a $20,000 bank loan. The deli is located at the corner of Kingsley & Detroit streets, in a 1902 building that originally housed Disderide’s Grocery. They originally planned to call it “Greenberg’s Deli,” but that name was taken. They decide on Zingerman’s in part because it starts with Z and will be easy to spot at the end of the yellow pages.

1979: Partners with Mike Monahan to become owners and operators of a seafood retail/wholesale business – it operates in Kerrytown as Monahan's Fish Market.

1975: Leaves graduate program in public health to begin working at Maude's, a restaurant in Ann Arbor where he meets Ari Weinzweig.

DATE? Earns undergraduate degree in zoology from the University of Michigan.

Zingerman’s founder Paul Saginaw on his time with Obama, the importance of raising the minimum wage, and why business owners should invest in their employees instead of their lobbyists – Mark Maynard blog, April 13, 2014

Saturday morning at the gym on the elliptical, that nasty elephant pain returned and it got the owner and my trainer, Heather, (a good Roadhouse customer and wife of Carsten Hohnke, the councilperson who helped save West Side Farmer’s Market this year) to come over and ask why I was moving like a turtle. “Angina.” Whoa, she yanked me off the machine, told me to get my ass to the doctor, and forbid me to come back until I had a doctor’s release. Liability, I am thinking.

The Corner Deli that Dared to Break Out of the Neighborhood – New York Times, May 3, 2007

The Coolest Small Company in America: Why are high-powered M.B.A.'s getting off the fast track to work for a $13-million food company in Ann Arbor? – Inc. Magazine, Jan. 1, 2003