Peter Allen is a local developer and member of the Ann Arbor greenbelt advisory commission (GAC). His firm, Peter Allen & Associates, is located at 944 North Main Street in Ann Arbor. 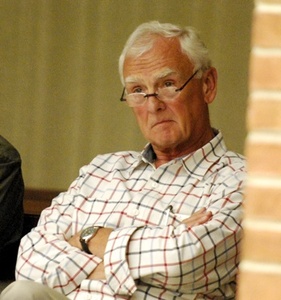 Peter Allen at a July 2014 meeting of the Ann Arbor planning commission. (Photo courtesy of The Ann Arbor Chronicle.)

Peter Allen is a Chicago native who came to Ann Arbor in the early 1970s. Most of his work has been rehabilitation of historic properties in Ann Arbor, including the conversion of Braun Court to restaurants and several buildings on North Main Street, overlooking the Argo Dam. Allen is an avowed urbanist with a dedication to Ann Arbor.

Allen was involved in the initial stages of the Broadway Village development, but withdrew from that project when it came time to court potential tenants out of concern that his status as an adjunct professor, teaching real estate development courses in the University of Michigan Business School, could be seen as a conflict of interest in recruiting the University of Michigan Health System as an anchor tenant in the project.

Allen's Kingsley Lane project, a proposed residential loft development west of Kerrytown, was hindered by slow pre-leasing rates and fluctuating construction costs; while the project received city approval several years ago, he was unable to break ground. A few years later, he partnered with Mark Berg and Tom Fitzsimmons on a condo project at that same site called 121 Kingsley West, at Kingsley and Ashley. The plans call for 22 condos in two new structures and an existing building. The site plan was given approval by the city council on Sept. 15, 2014.

As a lecturer at the University of Michigan College of Architecture & Urban Planning and the Ross School of Business, Allen has focused on teaching the elements of developing lively, walkable downtowns to over 130 students students yearly since 1981. He has served as faculty adviser to UM's Real Estate Certificate Program, and was founder and executive director of the University of Michigan Real Estate Forum for its first 10 years.

Allen has been involved in several business and civic organizations over the years. He was founding trustee for the Ann Arbor Hands On Museum, Kerrytown Concert House, Neutral Zone, and Ann Arbor CEO Council.

The Ann Arbor city council appointed Allen to the Ann Arbor greenbelt advisory commission for a term from April 7, 2008 through April 7, 2010, replacing Albert Berriz for the seat designated for a real estate development professional. In May 2010 he was reappointed for a second term from May 3, 2010 through June 30, 2013. At its Nov. 21, 2011 meeting, the council passed a resolution to restate the terms of six GAC members, including Allen, because "certain members who were appointed to fill vacancies for the remainder of the term of a member of the Commission created by the resignation of that member did not have their initial term of appointment correctly stated resulting in a discrepancy as to number of members whose terms. should expire in 2012; the extension of existing members terms (e.g. "hold-over") and use of the appointment date in designating the term of office has created inconsistent commencement and termination dates for terms which expire in the same year." That 2011 resolution restated Allen's term as running from July 1, 2009 through June 30, 2012. In May 2012 he was reappointed to a third term from July 1, 2012 through June 30, 2015.

Allen received his bachelors degree in arts & history from DePauw University, and earned an MBA from the University of Michigan. He served as a lieutenant in the U.S. Navy Reserve.