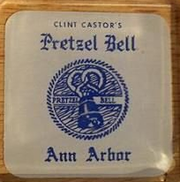 A new set of investors is taking up the old Pretzel Bell name.

History of the Pretzel Bell

The Pretzel Bell or P-Bell was a popular campus restaurant, owned by Clint Castor and his family, from 1934 until it closed in December 1984. It was the bar of choice for the Men's Glee Club, for Michigan Daily staff, and for many other campus groups. A popular local Blue Grass band, the RFD Boys, played to a packed crowd on Saturday nights for many years.  Much of the wall space was filled with U-M sports memorabilia.  After the final closing, the restaurant contents were seized by the IRS for unpaid payroll taxes, and all were auctioned on April 17, 1985.

After it closed you would annually spot alums coming back for homecoming asking for directions to the P-Bell and you'd have to tell them it was closed.

The first floor of the building later housed Champion House, which closed in 2012; the upstairs is the home of Automobile Magazine.

The bar closed for good when the IRS seized its assets in the summer of 1985 after owner Clint Castor Jr. failed to pay more than $110,000 in employees' withholding taxes, dating back to 1982, The Detroit News reported.