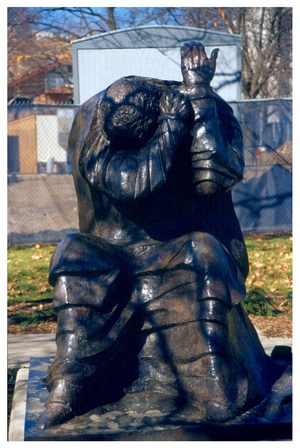 The small park east of the Rackham Building and west of Fletcher Street was the site of the first Jewish cemetery in Michigan, established in 1848. After the graves were disinterred in 1901 and moved to various other locales as the final step in decommisioning the adjacent early village burial ground, the land sat empty as a small green extension of Felch Park.

In 1988 Ann Arbor City Council passed a resolution to create a Holocaust memorial. A not-for-proft group, the Ann Arbor Holocaust Memorial Foundation, was created to direct the project and secure the needed funds. It was determined to commision a statue by noted American sculptor Leonard Baskin, and in the six years between the resolution and the staue and plaza's dedication, private donors contributed over $250,000.

It seemed obvious to the members of the foundation, as well as representatives of both the University and the city council, that the logical place for the memorial was the former Jewish cemetery that had lain dormant for years. It was decided to name the area surrounding and adjacent to the commissioned stute as Raoul Wallenberg Plaza in honor of the 1935 U-M alumnus and humanitarian.

Raoul Wallenberg was an architect who became involved with the politics of WWII. As secretary of the Swedish legation in Budapest during the war, Wallenberg worked to save thousands of Hungarian Jews through canny use of Sweden's sovereignity. Per Anger has been quoted as saying that while 120,000 Jews survived the Nazi extermination in Hungary, Wallenberg "must be honored with saving at least 100,000" of them.

On the day of the dedication, 1994-03-13, a special piece of music was played on the Burton Tower's grand carillon by carillonneur Margo Halsted. Called Threnody (Song of Lamentation), it was composed by Ellwood Derr, a U-M professor of music theory. The ceremony itself was held in Rackham Auditorium and was overseen by U-M President James Duderstadt. The keynote speech was given by Todd Endelman, the University's William Haber Professor of Modern Jewish History