The Regional Transit Authority of Southeast Michigan was created by the Michigan legislature in 2012 to plan for and coordinate public transportation in the region of Wayne, Oakland, Macomb and Washtenaw counties, plus the city of Detroit, and to deliver rapid transit in a region where none exists. 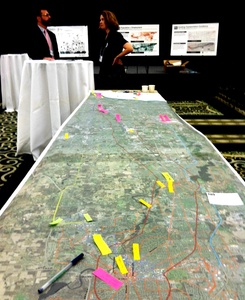 Satellite map of regional transit corridor running from Ann Arbor to Detroit, on display at a May 18, 2015 public open house hosted by the RTA at the EMU Student Center.

The RTA is the entity through which transit providers – including the Ann Arbor Area Transportation Authority – must apply for state and federal funds, and through which those funds are allocated to providers. The other transit agencies in the RTA region are the Detroit Dept. of Transportation (DDOT), SMART, and the Detroit People Mover. The RTA is also responsible for developing a Regional Master Transit Plan to guide present and future service and is empowered to put funding questions on the ballot for public vote.

The RTA's CEO is Michael Ford, formerly the CEO of the Ann Arbor Area Transportation Authority.

Detroit to Ann Arbor route one of three on regional transit radar – MLive, May 12, 2015