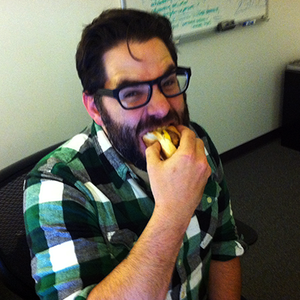 Rich RetyiRichard Retyi is the social media director at Ann Arbor digital marketing firm Fluency Media as well as a freelance writer for various publications including Concentrate and Damn Arbor. You can follow him on Twitter at @RichRetyi or read his blog at http://RichRetyi.com. In a previous incarnation, he worked for University of Michigan sports information, most notably writing about women's gymnastics and volleyball.

Richard Retyi is also the namesake of the "Rich Retyi & Loaded," a loaded potato bratwurst available at Biercamp, a local purveyor of fine meats.

Richard Retyi is known for drinking his manhattans on the rocks and usually follows with a Genny cream ale. His booming voice becomes boomier with each subsequent  one. His topics of discussion vary but usually stick to...well I'm actually not sure....I just smile and nod. He is what I would call a late-nightier and is probably good with his hands. I fondly refer to him as "Dick" and  enjoy his flannel presence. He is known for warming seats as well as hearts. I think he also writes stuff...not sure.

He can't do that many push-ups.