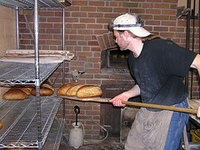 Fresh bread coming out of the oven at the River Street Bakery.

The River Street Bakery is owned by the Ypsilanti Food Co-op, next door. The bakery produces a range of organic artisanal sourdough breads in a wood-fired brick oven, as well as pastries. The bakery's bread is adored by many in the area, including people who "don't like sourdough." An article at downtownypsi.org explains,

Ypsilanti sourdough, however, has its own distinctive taste that is not particularly sour. Breads categorized as sourdough are made from a sourdough starter, which is a symbiotic culture of yeast and lactobacteria. Starter is fed with flour and water and captures wild yeast from the air. Since the sourdough starter for River Street's bread resides, like us, in Ypsi, its yeast cultures also hail from the Ypsi air. The air in Ypsi is different from the air in San Francisco (and being close to the Huron River, the air on River Street is even different from the air in other parts of Ypsilanti), so the wild yeasts of Ypsi (much like the citizens of Ypsi) are a bit different than those found anywhere else.

Bread is baked Monday, Wednesday, and Friday, and is brought over for sale in the co-op starting in the early afternoon. The bakery's products can also be found at the Ypsilanti Farmers Markets and at the People's Food Co-op in Ann Arbor.