Robert "Bob" Dascola is a barber who owns the Dascola Barbershop on State Street, which has been a family business since 1939. He is the son of the late Dominic Dascola. 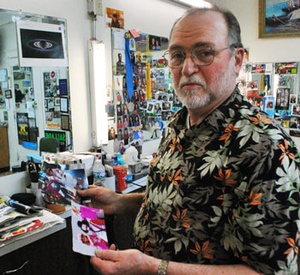 Bob Dascola in his barber shop in May 2014. (Photo courtesy of The Ann Arbor Chronicle.)

Bob was an announced candidate for Ann Arbor City Council in the Third Ward in for the August 2014 Democratic primary election, but was ruled ineligible in March 2014 by the Ann Arbor City Clerk's office. He filed a lawsuit in March 2014, Dascola v. City of Ann Arbor, to contest the constitutionality of the city charter's residency requirement. Dascola won the lawsuit (and attorney's fees) but lost in the August primary to Julie Grand.

Dascola was born and raised in Ann Arbor. He serves on the board for the State Street Area Association and is an active member of the Ann Arbor Rotary Club and the Friends of the Ann Arbor District Library.

Dascola has two grown children, Stephanie and Michael, from a former marriage.

"After winning a federal lawsuit to secure the right to be placed on the Ward 3 Ann Arbor city council Democratic primary ballot, Bob Dascola’s name was inadvertently omitted from the first wave of absentee ballots sent out to voters."

"[The city of Ann Arbor has] provided absolutely no authority as to why this Court should simply abandon the basic principles of law that have formed the foundation of the United States legal structure for over two hundred years."

Dascola will be challenging the city clerk’s conclusion based on court cases from the early 1970s.

Dascola took out petitions on March 12, but was subsequently informed by the clerk’s office that he was not eligible to represent Ward 3. According to city clerk Jacqueline Beaudry, Dascola did not meet the city charter requirement that a candidate for city council be a registered voter of the city and a resident of the ward to be represented for at least a year preceding election.

Robert Dascola, Dominic’s son, went to Greene’s Barber College in 1965 and graduated in 1966. He then went to work with his uncle Ernie at the Arborland store until he was drafted into the Army in 1967. Bob returned to Ann Arbor in 1969 and again worked with Ernie until early 1970’s when he moved to his own shop at 611 E. University, calling it U-M barbers.