Robert (Bob) Galardi is a retired teacher and administrator of the Ann Arbor Public Schools. His 32-year career at AAPS began as a teacher at Clague Middle School. He also served as dean of Community High School, principal at Pioneer High School, principal at Pattengill Elementary, and deputy superintendent for administrative and human resource systems. During his tenure he also served as union president for both the Ann Arbor Education Association (teachers union) and Ann Arbor Administrators Association. 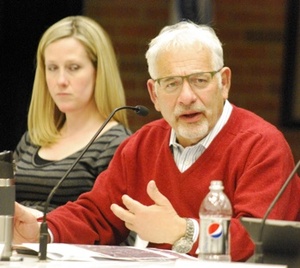 Bob Galardi at a March 2014 meeting of the Ann Arbor park advisory commission. Next to him is PAC member Paige Morrison. (Photo courtesy of The Ann Arbor Chronicle.)

He applied for the job of superintendent when George Fornero resigned in 2006, but the AAPS board selected Todd Roberts instead. Galardi retired from AAPS in August 2007.

In 2006, Galardi started a consulting business called the Educators Resource Group. He works with school districts in Michigan to develop and improve their programs for students, and facilitates negotiations and the problem-solving process with schools and other organizations. He serves as adjunct staff for the Michigan Association of School Boards.

Galardi grew up in Ann Arbor. His grandfather came here from Italy as a tradesman – a tile setter – and helped build many of the buildings in town and on campus. After a tour in Vietnam, Galardi attended Eastern Michigan University, first studying speech and drama and later returning to receive a teaching credential and eventually a masters degree in education.

Galardi and his wife Susan Galardi, an accountant, have been married for more than 30 years. They have two children – Angela and Anthony – who both live in New York City. Formerly residents of Burns Park, the Galardis live in the Liberty Lofts condominiums on the city's Old West Side.

Galardi is president of the board for the Allen Creek Greenway Conservancy, a nonprofit "dedicated to advancing the planning, construction and sustainable maintenance of a greenway along the Ann Arbor railroad and the historic alignment of Allen Creek." He also serves on the Ann Arbor Park Advisory Commission, and is chair of PAC's budget & finance committee. He was a member of the Leadership & Outreach Committee for the Ann Arbor Downtown Development Authority's Connecting William Street study.

He has been involved in the Burns Park Players for more than 25 years, frequently appearing in the cast for the group's annual productions.