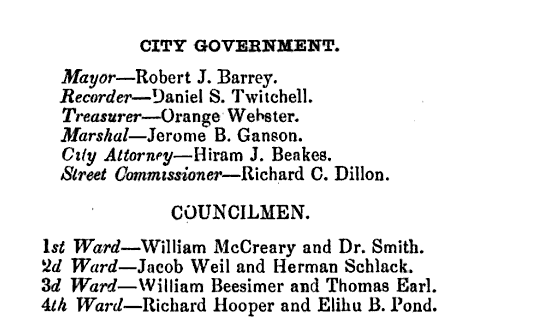 These gestures were largely ceremonial. In 1859 some of the city's German residents formed the Steuben Guards. With news of war, this unit offered itself for military duty as part of the First Michigan Infantry. Proudly decked out in their uniforms, they received the cheers and good wishes of an expectant citizenry and departed the train station for Detroit and regimental headquarters on April 29. Throughout this day of celebration and farewell the official escort for the Steuben Guards consisted of Relief Fire Company No. 2 and the newly formed Barry Guard. Commanded by ex-Mayor Robert J. Barry, this unit in June 1861 was reorganized as part of the Fourth Michigan Infantry. The students of the University formed a third unit, the University Battalion, while a fourth unit formed in May 1861 was christened the Ann Arbor Silver Greys.