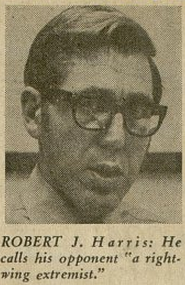 Harris was only the second Democrat to hold the office of mayor in Ann Arbor in nearly forty years. Soon after the riots, a Republican-led group called Concerned Citizens of Ann Arbor started its own recall campaign against the mayor and the Democrats on city council. Although none of these succeeded (neither did the recall of Sheriff Harvey), Republicans would win back the mayorship four years later, in part by playing off the Democrats’ supposed over-tolerance of hippie-led disturbances such as those on South University.