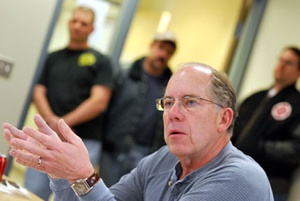 Fraser at a December 2009 budget meeting. Photo courtesy of the Ann Arbor Chronicle

Roger Fraser is the incoming (2014) Cass County administrator. He was formerly Ann Arbor City Administrator, a position which he held from 2002 to 2011.

He holds a Master of Public Administration degree from Western Michigan University (1976-1977), as well as BA in Political Science from the University of Michigan-Dearborn (1966-1968).