Ronald Woods is a professor in the Department of Africology and African American Studies at Eastern Michigan University. He holds a master's degree in history and a law degree, both from the University of Michigan. From his academic bio:

Professor Woods formerly served as the first Head of the Department of African American Studies at EMU and until recently, Interim Department Head. He has also served as Michael O. Sawyer Visiting Professor of Constitutional Law and Politics at the Maxwell School of Citizenship and Public Affairs, Syracuse University, and a Legal Services Attorney in Cincinnati, Ohio. Professor Woods previously was an Interim President of the Michigan Council of Black Studies and has been a consultant to school systems on various aspects of desegregation and diversity enhancement. He is on the Board of Directors of the African American Culture and Historical Museum of Washtenaw County, and is a consultant to the Charles H. Wright Museum of African American History in Detroit. From 2002-2004, Professor Woods was the Director of Eastern Michigan Institute for the study of Children, Families and Communities. A member of the Board of Directors of Wittenberg University, he has lectured internationally and has published articles on refugee policy in the horn of Africa and on African American vernacular English. 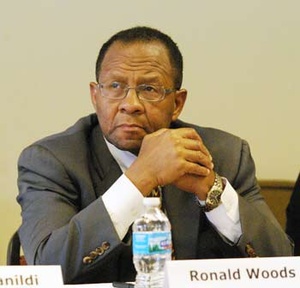 Ron Woods at a June 2013 meeting of the Ann Arbor Housing Commission. (Photo courtesy of The Ann Arbor Chronicle.)

Woods was appointed by the Ann Arbor city council to the Ann Arbor Housing Commission for a term from April 5, 2010 to April 30, 2011. He was reappointed in April 2011 for a term running through April 18, 2016. He serves as the commission's president as it undergoes a process to renovate its public housing units using private funding through low-income housing tax credits.