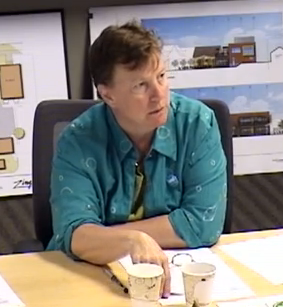 Sandi Smith at an Ann Arbor DDA board meeting.

Sandi Smith (b. 1963) served as a Democrat on the Ann Arbor City Council representing Ward 1 from November 2008 to November 2012. She has also served  on the Board of the Ann Arbor Downtown Development Authority since July 2004.

In 2008, she defeated First Ward write-in candidate Patricia Lesko in the August Democratic Party primary, and was unopposed in the November general election. Smith was re-elected in 2010, beating challenger Sumi Kailasapathy in the August Democratic primary and again running unopposed in November. Smith decided not to run again in 2012, and Kailasapathy was elected to that Ward 1 seat on the council.

Smith was first appointed to the DDA in 2004, and served on the board through her tenure on city council. Her current term on the board runs from August 20, 2012 to August 19, 2016. She previously served as the board's chair.

Smith is co-owner of Trillium Real Estate, located in Kerrytown's Braun Court. Her business partner is Linda Lombardini, who is also Smith's wife. The couple founded Trillium in 2001. In 2007, Smith was named REALTOR® of the Year by the Ann Arbor Area Board of Realtors.

Smith also serves on the board of the Jim Toy Community Center. She was a board member of the Washtenaw Rainbow Action Project (WRAP) from 1996 to 2000, serving as a member-at-large and chair of the membership and programs committees.

Smith earned a bachelors degree in psychology from the University of Michigan, and is a graduate of the Michigan Institute of Real Estate.