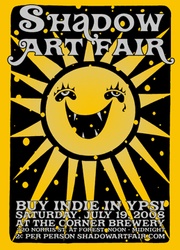 Poster for the July 2008 Shadow Art Fair, in Ypsilanti.

The next Shadow Art Fair is Saturday, July 10, 2010 from noon — midnight, at the Corner Brewery in Ypsilanti, MI.

The next Shadow Art Fair is Saturday, July 18, 2009, noon to midnight, at the Corner Brewery.

The Shadow Art Fair is Ypsilanti's contribution to Ann Arbor's collection of Art Fairs. A one-day event organized by the Michigan Design Militia, the SAF is held at Arbor Brewing Company's Corner Brewery, just north of Depot Town. The SAF is a juried fair featuring approximately 40 artists from around the Ypsilanti/Ann Arbor/Detroit/Hamtramck/East Lansing area, as well as musical and other performances. A 2-cent admission is charged; this and proceeds from ABC's special "Shadow Brew" go towards grants to local community arts projects.

The SAF started in July 2006 as a prequel - and tongue-in-cheek competitor - to the Ann Arbor fairs, with the second SAF held only five months later, in December of that year, due to the overwhelming response to the first Fair and also as part of Ypsi's pre-Christmas "shop local" initiative.

This year, organizers accidentally scheduled the small Ypsilanti fair to coincide with the last day of the Ann Arbor Art Fairs.