The Six Foot Poles are long time residents of the Ann Arbor/Ypsilanti area and have been performing locally since the turn of the century (2000). The members include the brothers Brzezinski, David (vocals, guitar and bass), Mark (vocals, bass and guitar) and Mat (vocals, drums and percussion) along with Theo Smith (vocals, keyboards and guitar) and Joelene (vocals and Mark's wife). Their music is a collection of favorite and obscure tunes from the 1960's through the present. You can find out more about the Six Foot Poles on their web site: 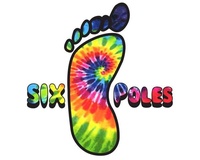