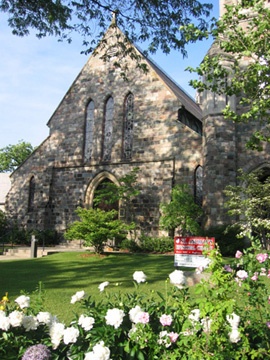 St. Andrew's Episcopal Church was established in Ann Arbor in the year 1828. In 1835, George Corselius, a well-known parishioner and the editor of Ann Arbor’s Western Emigrant newspaper donated an acre of land to the Episcopal Church. The church building was constructed 1839 and expanded in 1856 to incorporate the University student population.The church later decided to expand its existing building and accepted the plans and drawings of Detroit architect Gordon W. Lloyd. Gordon W. Lloyd was an experienced architect specializing in church architecture in the west. The building construction was initiated in June 1868 and the consecration ceremony of the completed building was celebrated on November 10, 1869.

The Episcopal Church building exhibits an English Gothic style following the architect’s design style. The materials used for the construction were hand-selected granite field boulders with an elegant hue variation. These granite boulders were split and placed in courses which varied from ten to fourteen inches wide.The church’s gable roof supports a stone Greek Cross.The roof is dressed with different shades of slate and ornamental cast iron cresting on its ridge. The entranceway to the church is decorated with an elegant English Gothic arch and ornamentally crafted door panels. The entrance façade of the building is studded with three long and narrow windows with gothic arches and completed with ornamental stained glass. The side façade of the building also displays long clerestory windows along with quatrefoil windows equally arrayed and completed with ornamental stained glass.The church’s tower, over eighty feet high is crowned with battlements and conical pinnacles. The tower’s stairs lead to the second story and belfry. The church’s interior has a typical basilica plan with a long nave in the center and aisles on either side of the nave. The church’ interiors are also adorned with gifts received from over the years. One notable item is the 1875 walnut eagle lectern and stained glasses from Louis Comfort Tiffany. St. Andrew’s Church has been included in the Division Street Historic District based on its antiquity and treasured artifacts.