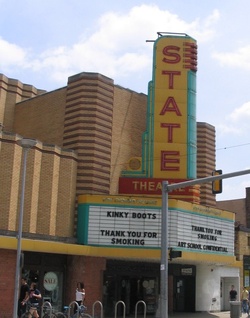 The marquee of the State Theatre.

Theater at the corner of State Street and Liberty Street, upstairs from Urban Outfitters. The State is privately owned, but programming is managed by the Michigan Theater.

There are two screens at the State. When the theater opened in 1942 it was one large screen, but time and progress brought retail to the first floor and divided the former balcony in half. A 2013 proposal would develop the upstairs into office space, eliminating the theater.

The State generally plays slightly more mainstream movies than the Michigan, and with longer runs; traditions include Saturday night midnight showings of cult favorites and Halloween performances of the Rocky Horror Picture Show.

1997. Michigan Theater's Film Programming and Marketing teams take over programming of the space.

1987. GKC (George Kerasotes Corporation) sells building to Tom Borders, co-founder of the Borders bookstore chain, for his Hogarth Management organization. [Unsure whether this is an ownership change or an option to buy].