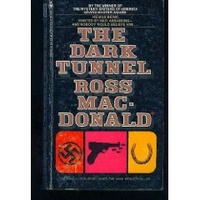 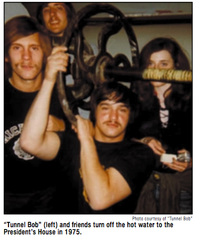 Tunnel Bob and friends turn off the hot water to the University of Michigan President's House, 1975

There is an extensive network of steam tunnels under downtown Ann Arbor. Today, they are very hard to access and many have motion detectors.

It has been rumored that if you try to go into entrance 838, darts will totally shoot out of the walls at you, all Indiana Jones booby-trap style. Do not leave the illuminated area, or DPS will get you and press charges.

We got written up in the Michigan Daily when we turned off the President's hot water from underneath his house -- we actually tried to inform the Daily by tunnelling into their building via a trapdoor in its first-floor broom closet, but the door out of the closet was locked from the outside.

“Tunnel Bob,” a University student from 1971-75, often trekked through the tunnels with a group of five or six adventuresome accomplices known as the Elliot Expeditionary Force. The group was named after the Elliot House in the Mary Markley Residence Hall, where the members lived.

Ken Millar, an English graduate student at the University in the 1940s, wrote detective novels under the pseudonym Ross MacDonald. After Millar was nearly caught by a security guard while exploring the tunnels, he was inspired enough to use them in one of his books, “The Dark Tunnel,” which takes place at the fictional Midwestern university town of “Arbana.”