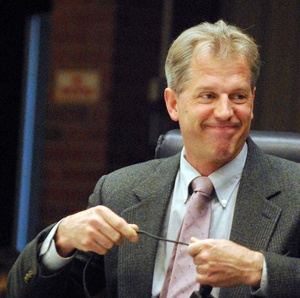 Steve Kunselman (Photo courtesy of The Ann Arbor Chronicle.)Stephen Kunselman (b. 1963) was a member of Ann Arbor City Council representing Ward 3 until November 2015.

He was re-elected in 2011. He was re-elected again in 2013, defeating Democrat Julie Grand in the August 2013 primary election and independent candidate Sam DeVarti in the November 2013 general election. In October 2014, he pulled petitions to run for the Ward 3 council seat again in 2015. He lost to fellow Democrat Zachary Ackerman in the Aug. 4, 2015 primary.

He came in third in the mayoral race in the August 2014 Democratic primary with less than 17% of the vote.

Before serving on city council, Kunselman had served on the Ann Arbor Planning Commission from 2004-2008. His service on city boards, committee and commissions, by virtue of his city council position, include stints on the taxicab board, brownfield review committee, labor committee, housing board of appeals, and audit committee. He also has served on the environmental commission, park advisory commission and housing commission.

He works as an Energy Conservation Liaison for the University of Michigan, handling outreach and communications for the Planet Blue Operations Team.

Kunselman is married to Letitia Kunselman, a school teacher. They have four children from their previous marriages. Their home is in southeast Ann Arbor, near the Mary Beth Doyle Park southwest of Packard and Platt.