Steve Powers is the city administrator of Ann Arbor. He was hired in September 2011 and served four years. In September 2015 he accepted a job as city manager for Salem, Oregon, leaving Ann Arbor in November; his last council meeting was November 16, 2015. 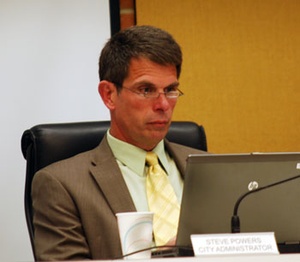 Steve Powers at a Sept. 3, 2013 meeting of the Ann Arbor city council. (Photo courtesy of The Ann Arbor Chronicle.)

From December 2013 until his departure in 2015, Powers also served on the board of the Ann Arbor Downtown Development Authority, in the position designated for the mayor or city administrator. Previously, the board seat had been held by mayor John Hieftje for 13 years.

He is married to Jayne Amundsen-Powers, an elementary school teacher. They live in Ward 3 on East Stadium Boulevard east of Packard, and Powers frequently walks or rides his bike to work at city hall. The couple has two daughters and a son.

Towards the end of each of the three interview sessions, time was allotted for candidates to ask questions of the panel. Powers asked all three panels a question about the management style the city of Ann Arbor is seeking. He told them if a county administrator like him was on their short list – he’s been the county administrator of Marquette County, Mich., since 1996 – then that suggested to him councilmembers were looking for someone who had a more participatory, facilitative management style as opposed to a more a strong, CEO-type style.