Sumangala (“Sumi”) Kailasapathy (b. 1967) is a CPA and Ann Arbor City Council member and has represented Ward 1 since 2012. A Democrat, she was re-elected to a second two-year term in November 2014. 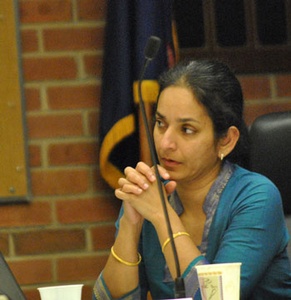 Sumi Kailasapathy at a December 2012 Ann Arbor city council meeting. (Photo courtesy of The Ann Arbor Chronicle.)Kailasapathy is a native of Sri Lanka who has been living in the United States since the early 1990s. She and her family have been Ann Arbor residents since 1997.

Kailasapathy attended Wellesley College and received a dual undergraduate degree in economics and political science. She earned her MA and a MPhil in political science from the New School for Social Research.

She taught gender studies, international political economy and globalization at Eastern Michigan University for 10 years. She is employed as a CPA at a downtown Ann Arbor firm, Edwards, Ellis, Armstrong & Company, P.C.

Kailasapathy is married to Giri Jogaratnam, a professor at Eastern Michigan University. They have two children, Ashwin and Keshav (ages 17 and 11, respectively, in 2014).

Kailasapathy has her roots in Sri Lanka’s academe, as the daughter of the late Prof. K. Kailasapathy (Tamil scholar and first President, University of Jaffna) and Sarvam Kailasapathy (formerly Development and Gender Advisor, Canadian International Development Agency). Sumi is also the daughter-in-law of Prof. T. Jogaratnam (Peradeniya Agriculture) and the wife of Giri Jogaratnam, Professor of Hotel and Restaurant Management at Eastern Michigan University. Sumi’s sister Dr. Pavithra Kailasapathy is Head, Department of Human Resources Management of the University of Colombo (in Sri Lanka).

Curbing the DDA – Ann Arbor Observer, December 2013 (Note the corrections at the end of the article.)