Susan Baskett is a trustee on the Ann Arbor Public Schools board. She has served on the AAPS board since 2003 and has been a member of the Ann Arbor Area Transportation Authority board since 2013. She is running for another 4-year term on the school board in the November 2014 election. 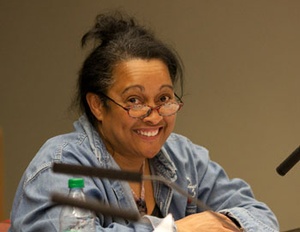 Susan Baskett at an April 10, 2013 meeting of the Ann Arbor Public Schools board of trustees. (Photo courtesy of The Ann Arbor Chronicle.)AAPS trustees are elected in nonpartisan races. During her tenure, Baskett has served as vice president of the board and chair of its performance committee.

The AAATA board position is appointed by the Ann Arbor city council. She was appointed in 2013 to replace Jesse Bernstein, for a term ending May 5, 2018.

Baskett is a strategic consultant for Covaron Advanced Materials, an Ann Arbor-based startup. She has previously served in a variety of marketing positions with a focus on the automotive industry, at GP Strategies Corporation, Campbell-Ewald, The WimbleyGroup Inc., and General Motors.

Baskett holds a bachelors degree in sociology from the University of Michigan, an MBA from Duke University, and a graduate certificate in healthcare management from Eastern Michigan University.