Susan Pollay is the executive director of the Ann Arbor Downtown Development Authority, a position she's held since September 1996. During that time she also served as associate city administrator from 2000-2002 – along with former city parks manager Ron Olson – during a transitional period after the resignation of city administrator Neil Berlin and before the hiring of a new administrator, Roger Fraser. 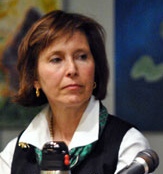 Susan Pollay at a February 2012 forum on sustainability. (Photo courtesy of The Ann Arbor Chronicle.)

As of 2014, she serves on the board for The Ark, an Ann Arbor music venue; the University of Michigan Natural History Museum board of advisors; the International Downtown Association (IDA) board of directors, and the getDowntown advisory board.

She is a former board member of the Washtenaw Community College Foundation.

Ann Arbor Chronicle articles on the DDA and Susan Pollay