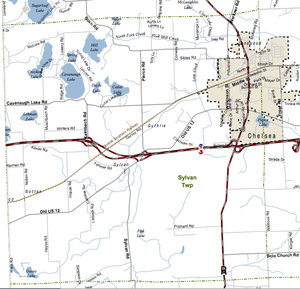 Sylvan is a small township of approximately 3,000 people located on the western edge of Washtenaw County, around the junction of I-94 with M-52.

The Township retains its German farming roots, and is still largely rural, as befits its name - SEMCOG estimates that, in 2000, 1/3 of the Township was in active agricultural use, with another 1/3 in undeveloped grassland, shrub, woodland, or wetland. The majority of residential development in Sylvan is clustered around the western edge of Chelsea and around Cavanaugh Lake, to the northwest. Sylvan is also the home to the Chrysler Proving Grounds.

Sylvan Township was first settled in 1830 by Cyrus Beckwith and William A. Begole, Beckwith building a home on what is now Old US-12, west of the Chelsea Fairgrounds, and Begole further south, in what is currently the Chrysler Proving Grounds.

Chapman notes the area as being quite attractive:

When the pioneers first visited Sylvan township they beheld a beautifully undulating country, gemmed in part with clear lakes, and diversified by a range of romantic hills, the surface covered with "oak openings" that did not stand too thickly to prevent the growth of the luxuriant blue-grass beneath. Owing to all those natural advantages, the hardships of the pioneer were ameliorated and the early settlers at once provided with feed for their stock and other necessaries, which very much lessened the hazard of beginning life in the new country.

A few more individual settlers arrived over the next year, including Jesse Smith, Elias H. Kelly, and Henry Depew, and a group of families from Addison County, Vermont, came to the area in 1832; this "Vermont Settlement" located south of Chelsea, in the area of Jerusalem Road. Leading Chelsea citizens James and Elisha Congdon settled in what is now downtown Chelsea in 1834. On the first Monday of April, 1834, the settlers held an election to form a Township and name it Sylvan, with Nathan Pierce elected Supervisor and Elisha Congdon Clerk.

A number of hamlets arose in the first years of the Township - Sylvan Center, on Old US-12, is still the location of the Township offices; Pierceville was founded around the intersection of Old 12 and M-52, and Davidson Station was formed around the time the rail line came through Chelsea, the Congdons buying out several of the businesses in the nearby Pierceville to secure their town's preeminence.