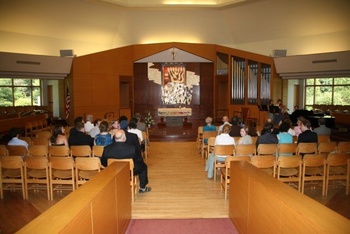 Temple Beth Emeth is the only Reform congregation in Ann Arbor, located at 2309 Packard Rd. The temple shares space--sanctuary, office space, and educational rooms--with St Clare of Assisi Episcopal Church; the shared property is managed by Genesis of Ann Arbor. In the main, service times do not conflict, as Shabbat runs Friday evening to Saturday evening and the church celebrates on Sundays.

The main sanctuary is a shallow amphitheater of a space, with built-in pews around the outside and a flat, wooden floor in the center. Chairs can be rearranged in the center to accommodate almost any number of congregants. (On High Holy Days, the sanctuary overflows. Sometimes parallel services are run in the social hall; in fall 2006 the congregation rented out EMU's Pease Auditorium.) The ceiling is high, and windows are prominent.

Clergy at TBE are Rabbi Robert Levy and Cantor /localwiki.org/ann-arbor/Cantor_Regina_Lambert-HayutRegina Lambert-Hayut .Rabbi Levy received his ordination from the Hebrew Union College-Jewish Institute of Religion in 1979, and came to Beth Emeth in 1984. Cantor Hayut joined in 2014. A member of the graduation class of 2002 from the Debbie Friedman School of Sacred Music of the Hebrew Union College, Cantor Hayut served as a student as well an ordained cantor in several congregations in Bergen County, NJ including the Barnert Temple in Franklin Lakes and Temple Beth Or in Washington Township.

Friday evening services are often sparsely attended, allowing Rabbi Levy occasional space to invite congregates' own thoughts after his sermon. Saturday morning Torah study and lay-led service (in the small chapel opposite the Temple Gift Shop) have a small and lively core of attendees, while the larger services in the sanctuary often include b'nai mitzvah.