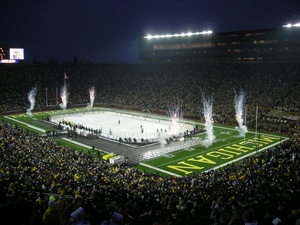 The Big Chill at the Big House, after Michigan's fourth goal (CC-BY-SA-3.0 Michael Barera)An NCAA men's hockey game between the University of Michigan and Michigan State on December 11, 2010 at Michigan Stadium, The Big Chill at the Big House saw the largest crowd on record for a hockey game, with official attendance of 113,411. The previous record for any hockey game of 77,803 was at the 2010 world championship in Germany. This number is also the largest crowd to see any event at Michigan Stadium, surpassing the 113,090 for a football game earlier in the year.

The Michigan team was ranked #12 going into the game, while Michigan State was unranked. Most observers expected a closer match, however, than Michigan's 5-0 win over Michigan State. Michigan players Jon Merrill and Carl Hagelin each scored two goals and David Wohlberg scored one. Matt Rust had three assists. Shawn Hunwick stopped 34 Michigan State shots for his second career shutout.

Outdoor air temperatures hovered in the high 30's with light breeze and partly-cloudy skies. The game was televised on Fox Sports Network in high definition.