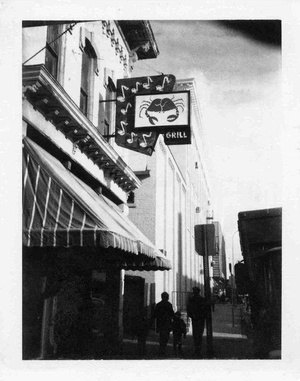 The Cracked Crab in this 1971 photo; where Cafe Zola is now.

The Cracked Crab was an outstanding "fish joint" and ahead of its time. It predated Real Seafood and originally had only one storefront and few seats. The fish was fresh and superb; the beer list was extensive (this was before wine became the rage). One could enjoy outstanding quality on a student's budget. As a result, the Crab was regularly packed and was a campus favorite. The Dungeness crab was, well, to die for, as was the blue crab.

Alas, success contains the seeds of failure. Because of its popularity, the Crab expanded to the adjacent storefront, and things seemed never the same. The close-in ambiance was lost; more to the point, the food suffered. About that time (1980?), Real Seafood opened, and the Whiffletree (Huron, west of Main) were strong competitors on quality. The Earle opened across the street in 1978(?), and the Crab suffered some in comparison. The clientele began to drift away, the food quality was uneven, and the experience became banal.

After it closed, the roof started to leak, and it was a real mess to turn it back into functioning commercial space.

In its day, really a wonderful place. There is nothing really like it in Ann Arbor today.

The sign with the music notes and the crab was formerly at the Town Bar.

In 1971 the Cracked Crab took over and did a major remodeling that covered the facade, added a phony first-story roof, and lowered the entrance by removing the stepping-stone with Herz's name etched in it. (It can be found embedded in the sidewalk by the Del Rio's side door.)