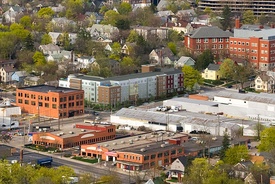 After the rejection of The Madison, the developers brought back a new proposal for The Moravian. It was rejected by City Council in April 2010.

Hieftje said the most significant benefit the developer included was 12 units of affordable housing, but he said that didn't make up for the project's downsides. "The developer is proposing a relatively massive development that challenges the scale of the established neighborhood. I don't see this offering significant innovation in land use or other typical benefits,"

The Moravian is proposed for construction on a 0.85-acre lot at 201 E. Madison St. The Planning Commission is being asked to rezone the site - two blocks south of downtown Ann Arbor - from R4C (a multiple-family dwelling district) and M1 (a limited industrial district) to a PUD district.