Think Local First is a nonprofit with the mission of supporting and cultivating locally-owned, independent businesses in Washtenaw County, Michigan. The group's director is Chris Good. 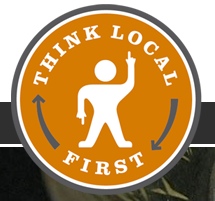 In 2003 and 2004, a group composed of long-time local business owners, new business owners, and community members began to meet to talk about their concern that it was becoming more and more difficult for locally-owned businesses to survive in this area. This group shared a common belief that strong communities begin with businesses that are a part of the fabric of our community, and that express their connection to and respect for their community in their choices of goods and services and the way in which these are provided. To strengthen these locally-owned businesses, the group formed a nonprofit called the Living Economy Network (LEN) so that they could connect businesses to one another and educate the community about the value of local ownership.  In 2006 LEN changed their name to Think Local First.

From a May 14, 2014 press release about the change: "Branam has deep experience in area media, from a decade as a newspaper reporter in Ann Arbor and Ypsilanti to 15 years of digitally focused marketing work , most recently with his own consulting firm, Ink by the Barrel New Media. He served on the TLF Board of Directors prior to his appointment as interim Director. Branam is also known to many as the lead singer in Ann Arbor roots-rock band Corndaddy and he serves on the Board of Directors of ArtServe Michigan."

Branam held the position until January 2015, when the TLF board hired Chris Good, a local musician and former farm manager at Gardenworks Organic Produce and Sprouts. He also had served on the board of the People's Food Co-op. Good also produced a "Buy Local" song and video featuring more than 50 area businesses, organizations, and musicians.

TLF members are featured in weekly segments of the Lucy Ann Lance Show on 1290 WLBY-AM.

In 2013 the group started the annual Washtenaw Indie Awards, in partnership with The Ann magazine. The Ann's editor and co-founder, Kyle Poplin, is a TLF board member. In 2014, the categories/winners were:

TLF is part of a network of like-minded organizations nationally. It's affiliated with the American Independent Business Alliance (AIBA) and the Business Alliance for Local Living Economies (BALLE). Zingerman's co-founder Paul Saginaw is a former BALLE board member.