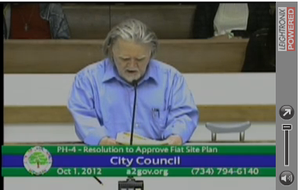 Thomas Partridge is a Democrat and a frequent public commenter at Ann Arbor City Council and other public meetings.

July 7, 2016. At Ann Arbor City Council, it was reported that Partridge had been seen near his Ann Arbor home. He had been absent for some time from public commentary.

Partridge, a resident of Scio Township, spoke during all four available times for public comment.

A Scio Township resident who regularly speaks in the public comment periods at county board meetings and meetings of the Ann Arbor City Council, Partridge has declined requests for interviews. He also did not return the voters guide questionnaire given to him by The News.