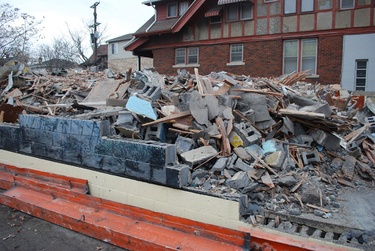 A mound of rubble where the former Tios building used to be, including cinderblock shards with remnants of Zeke Mallory’s seascape mural. Photo courtesy of the Ann Arbor Chronicle.

A Mexican (or "Mich-Mex") restaurant. Tios has one location, one on East Liberty Street where Salsarita's used to be. A second in Ypsi at 2224 Washtenaw Ave closed in March 2010.

Tios does a lot of delivery, especially late at night since the Huron location is open until 4:00am, but also has dining rooms at each location, the Washtenaw location being the largest. It is also known for having lots of hot sauces for sale. It's not authentic Mexican food and the price is a little high. They are one of the few places to offer fish tacos in the area. They claim to make their own salsas but I saw a big jug of brand name salsa while getting take-out at the Washtenaw location.

Elsewhere on the web

The restaurant is located just west of Hewitt Road. Vacant restaurants on Washtenaw between Hewitt and Golfside - also in Ypsilanti Township - include the former Cottage Inn Cafe and the drive-thru built as a Hot 'n' Now. Yet a recent opening includes the newly constructed Asia City.

By June, Tios Mexican Cafe will move from its longtime spot on East Huron Street to East Liberty Street in downtown Ann Arbor, where Salsarita's Fresh Cantina used to be.

The owners of Tios Mexican Cafe addressed Ann Arbor's City Council Tuesday, offering a harsh critique of the city's purchase of the Huron Street property where they've done business for more than 20 years.