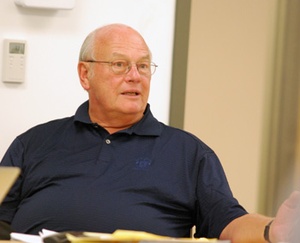 Tony Derezinski at an April 2012 meeting of the Ann Arbor public art commission. (Photo courtesy of The Ann Arbor Chronicle.)

In 2014 he ran unsuccessfully for a seat on the Washtenaw Community College board of trustees in an eight-way nonpartisan, countywide race for three open seats. He finished 7th with 14,941 votes (8.66%).

In the 1970s, Derezinski served one term as a state senator representing the Muskegon area, and was on the Eastern Michigan University Board of Regents – an appointed position – from 1984-1996. He served as a lobbyist for the Michigan Association of School Boards.

He has served on the boards for a variety of local nonprofits, including the Michigan Theater Foundation and Honey Creek School. As of 2014, he serves on the board for the Main Street Area Association and Arbor Hospice, and is vice-chair for the Michigan Law Revision Commission.

In his capacity as a city councilmember from 2008-2012, Derezinski served on several city boards and commissions, including the planning commission, public art commission, Washtenaw Area Transportation Study (WATS), and the Ann Arbor housing commission.

Derezinski is a Vietnam War veteran. He is married to Catherine "Katy" Derezinski. The couple lives in the Ann Arbor Hills neighborhood. They have an adult son, Justin Lahart, from Katy Derezinski's previous marriage.

Current student and former teacher among those elected to WCC board, as current trustee unseated – MLive, Nov. 5, 2014

WCC Election: Tensions are heating up the race for seats on the school's board of trustees – Ann Arbor Observer, October 2014

Ward 2 candidates agree on need for transparency, disagree on everything else – Michigan Daily, Aug. 3, 2008