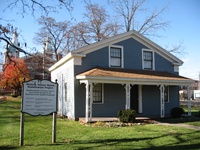 The Towner House is the oldest house in Ypsilanti on its original foundation.

This 1837 Greek Revival house is the oldest house on its original foundation in the City of Ypsilanti. The house was originally owned by the Cross family, before the Towner family's ownership, which stretched from 1851-1951.

The Towner House's exterior has been recently rehabbed, but the building stands empty, and has repeatedly faced demolition. The First Presbyterian Church of Ypsilanti purchased the house in 1972, intending to expand their church in the future, and offered up the building to anyone who wished to move it; no purchaser came forward, and, with the creation of the Ypsilanti Historic District, the Church was denied permission to move or demolish the house in 1982 and again in 1992. In 1994, after multiple building code violations were discovered in the house, the City of Ypsilanti took court action against the Church to mandate repairs. While area historic preservationists consider the salvation and rehabilitation of the house to be a significant victory, this contentious history, and the continued vacancy of the house, has led to frustration on the church's part.

Towner Decision Due Next Month ‘82

Historic House May Get New Location 1981